The most common time to experience sudden cardiac arrest could be changing, according to new research.

“The dogma — in fact, this is everywhere, in all the textbooks about sudden cardiac arrest — [is that] the most common time period for people to have a sudden cardiac arrest is early in the morning,” said Dr. Sumeet Chugh, one of the authors of the study published in the journal Heart Rhythm.
Chugh, Price Professor and associate director of the Heart Institute and director of the Heart Rhythm Center at Cedars-Sinai, and his co-authors used the Oregon Sudden Unexpected Death Study to look at 2,631 cases of sudden cardiac arrest.
Of those incidences, the most commonly reported time was the afternoon, when 31.6% of cases happened. Only 13.9% happened in the early morning, 27.6% in the morning and 26.9% in the evening. 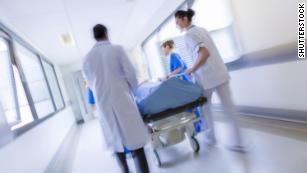 The researchers looked at sudden cardiac arrest, an electrical malfunction in the heart, rather than heart attacks, which are blockages, with the understanding that both can happen at the same time.
For Chugh, there were a few ways to explain this change in peak times. Among them is increased accuracy in observations of the timing of the events. Also, treatment is changing for people who experience or could be at risk for sudden cardiac arrest, and medications or other treatments could be affecting their peak times.Another factor may be the shift to a more 24/7 culture.

What are heart failure, heart attack and cardiac arrest?

“Our hypothesis is that in the last decade or two decades, we’ve really changed the way that we behave as human beings. We’ve changed the way that we work. We are constantly wired,” Chugh said. “I would call it an ‘always on’ existence. A lot of people are working all the time, or they’re tied to, or tethered to, a smartphone, almost every instant of the day, sometimes at night.” Others have also considered the idea that new technology could play a part in potential changes in the most common times for cardiac arrest events.
“Maybe because we are constantly working, connected, living in a 24/7 culture, that maybe that’s part of the reason things are a little bit different now. Of course, we don’t know that for sure. This is all observational,” said Dr. Comilla Sasson, vice president of emergency cardiovascular care, science and innovation at the American Heart Association.
Sasson, who was not involved in the new research, said its findings were not necessarily “surprising,” as previous research has had similar results, such as a higher number of cardiac arrests during daytime hours. However, she suggests that this research could mean “we are getting better, hopefully, at capturing when a sudden cardiac arrest event is actually happening.
“The lows are still the lows in terms of the timing, and I think for me, that’s really the take-home point,” she said “There is something to be said about our bodies’ natural circadian rhythms, and I think this tells us that there is something that happens to our bodies overnight.”
Chugh’s research also suggests that Monday may no longer be the most common day of the week for sudden cardiac arrest.

“Where all previous studies had shown that Mondays were the worst day for sudden cardiac arrest, we couldn’t find that peak either,” he said. When it came to the most common day of the week, the only trend researchers saw was a low number on Sundays.
Sasson believes that research like this can help in two ways.
“I think it helps us plan from an emergency medical services perspective, so when hospitals and primary and first responders need to be thinking about making sure we are staffed appropriately to account for this variation,” she said.
Her second reason is more personal. “I think we need to think a little bit more about … the changes in the way we live, work and play, in terms of our 24/7 culture, [and] what impact that has on our bodies, and whether that is maybe disrupting some of our circadian rhythms,” Sasson said. “It ultimately could be potentially contributing to the idea that maybe we are stressed all throughout the day.”
Get CNN Health’s weekly newsletter
The American Heart Association says that there are more than 35,000 incidences of cardiac arrest outside hospitals in the United States every year.
The US Centers for Disease Control and Preventionestimates that approximately 70% to 90% of those who experience sudden cardiac arrest die before reaching a hospital, and approximately 209,000 people are treated in hospitals for cardiac arrest yearly.
Source: https://www.cnn.com/2019/01/14/health/sudden-cardiac-arrest-changing-peak-time-study/index.html